Hey Clockers, time only counts when you're doing time 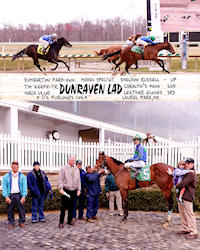 When I get young horses in to the track for the first time one of my first jobs is to teach these young horses what racing is all about. I get them in condition. Get them acclimated to breaking from the gate. I also evaluate their performance both by watching how they compete and handle the pressure with other horses in the morning as well as with my stop watch.

Joe Keelty reminded me that time only matters when you boil an egg and when you are doing time. He was referring to his Broken Vow 3-year old Buzz Chace and I had purchased at the 2009 Fasig-Tipton yealing sale at Timonium. As a 2-year-old this colt was immature and not ready for the pressures of racing. We tried him again and Dunraven just seemed to have a hard time getting out of his own way. He never did anything wrong, he also never did anything fast. His times were slow. He always tried when he went out there in company. But he never really impressed us.

Well, he impressed us in his debut.

I told Joe we would give him a race before we had to ship to Pimlico. Give him some schooling. I have done all I could do with him in morning. It was time for him to show us what he has.

Sheldon had worked him many times in the morning and liked the way he handled himself. While he wasn’t fast he never put a foot wrong. After breaking well Dunraven Lad settled third. Turning for home Sheldon asked him to go and the pair went straight to the front. With horses gaining on either side Dunraven would not let them past, winning by a neck. It was a very gutsy performance.

The one thing I haven't figured out is how to measure their desire. I guess if we could know that, it would be an easy game. Until you put these horses in that type of a situation. You just don't know.

Also on the winning docket, Buzz and Nancy Frankil had another thrilling win in their homebred Saint Sarah. The Sweetsouthernsaint filly is now two for three lifetime. Going around two turns was not a problem for Sarah as she broke well and was hung four wide on the first turn. Sheldon guided her just off the early lead and by the backside, they had the lead. Turning for home we were hoping she had enough left for the finish. As usual Sheldon had done a marvelous job saving plenty.

I had two more to run on the card. Both in the last event at Laurel. Captain Twitch for Ann Jackson and Doctor James for Buzz and Nancy. Both horses had a shot. Buzz told me that he felt he would have a better chance if I would tell him I didn't like Doctor James. "My horses run better when you tell me you don't like them". (Referring to Saint Sarah).

Sheldon had ridden four winners on the card and a win on Captain would match his best day at the races, five winners. Wesley Ho took charge of James. Sent off as the favorite the pair broke well. Captain stayed towards the front as James slowly drifted towards the back, turning for home Captain went to the front and never looked back. James came running to catch third.